Pat Mitchell Dunn, Class '71 provided the below heartfelt story. If you wish to add your insights please let us know by using the “Website Contact” button. 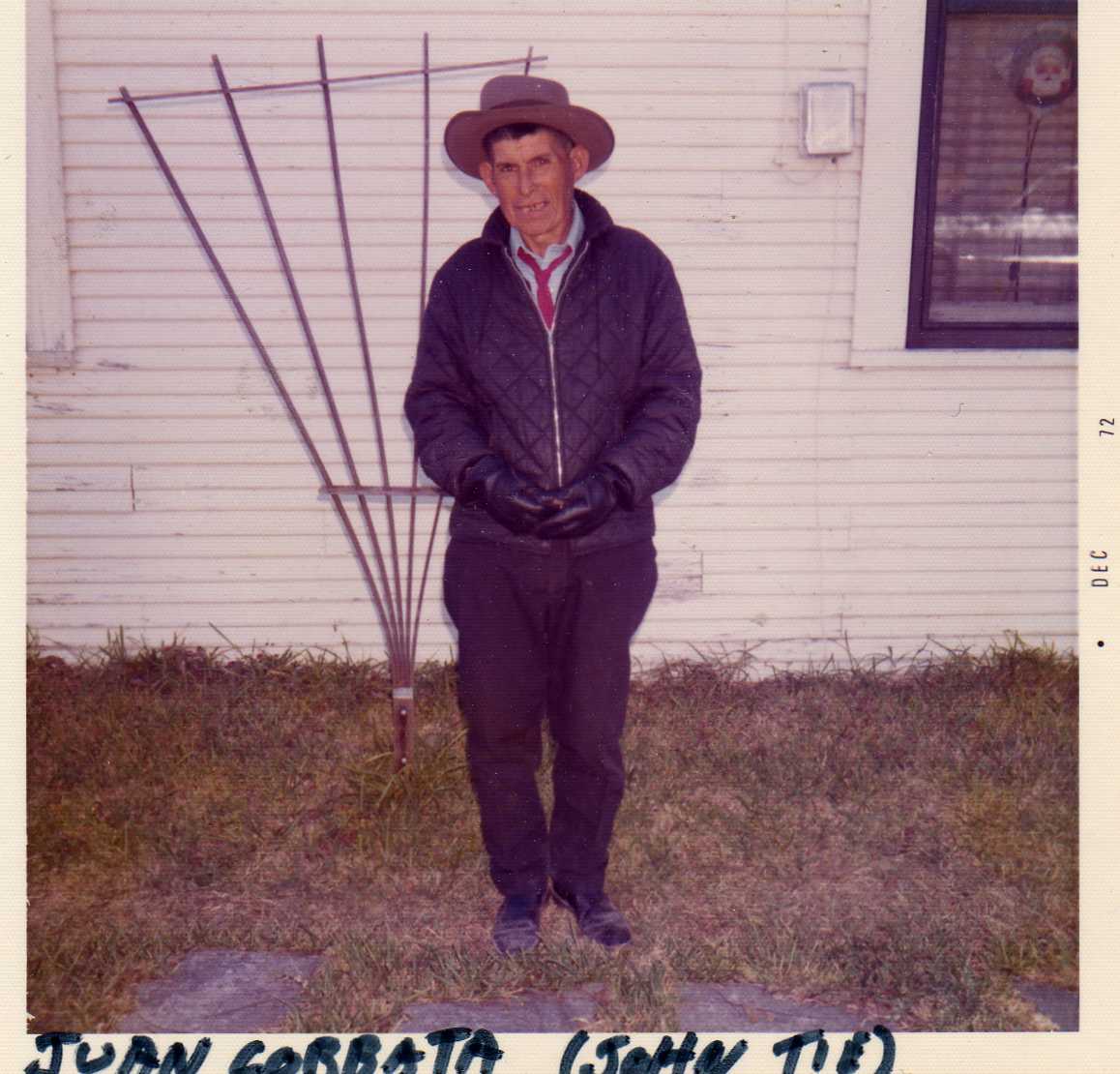 In reading many of the letters sent in about our memories of Del Rio, and enjoying them, I saw that someone mentioned our dear "Juan” or better known as "Necktie Joe”, who walked the streets of south Del Rio, greeting folks at H.E.B., directing traffic along Pecan St or South Main Street, doing odd jobs for anyone who would hire him.  He had special needs and a very special heart.

Juan lived a few streets away from our house on Arbor Ave.  We knew him our entire lives.  We would return to Texas to see him still walking the streets of Del Rio as he always had, looking a bit older, but always friendly, sometimes scaring kids who did not know or understand him.  I believe he was born in the 30's.  I had his obituary at one time but can't find it now.

He was known as "Necktie Joe" due to the neckties he always wore along with hats.   He did not have to know you; he just wanted to greet you.  "Hey, Bobbi” was his greeting you'd often hear.

I have attached 2 photos of Juan.  One is taken Dec. 1972 by my dad, W.G. Mitchell, USBP/retired, who took LOTS of memorable photos around Del Rio.  (Some were in Whitehead Museum)     The 2nd photo, I took of Juan greeting my dad at the car window after my dad had gone to the nursing home to live/1994.  I believe it was the last time they saw each other as my dad died in 1995 and Juan died 1998. 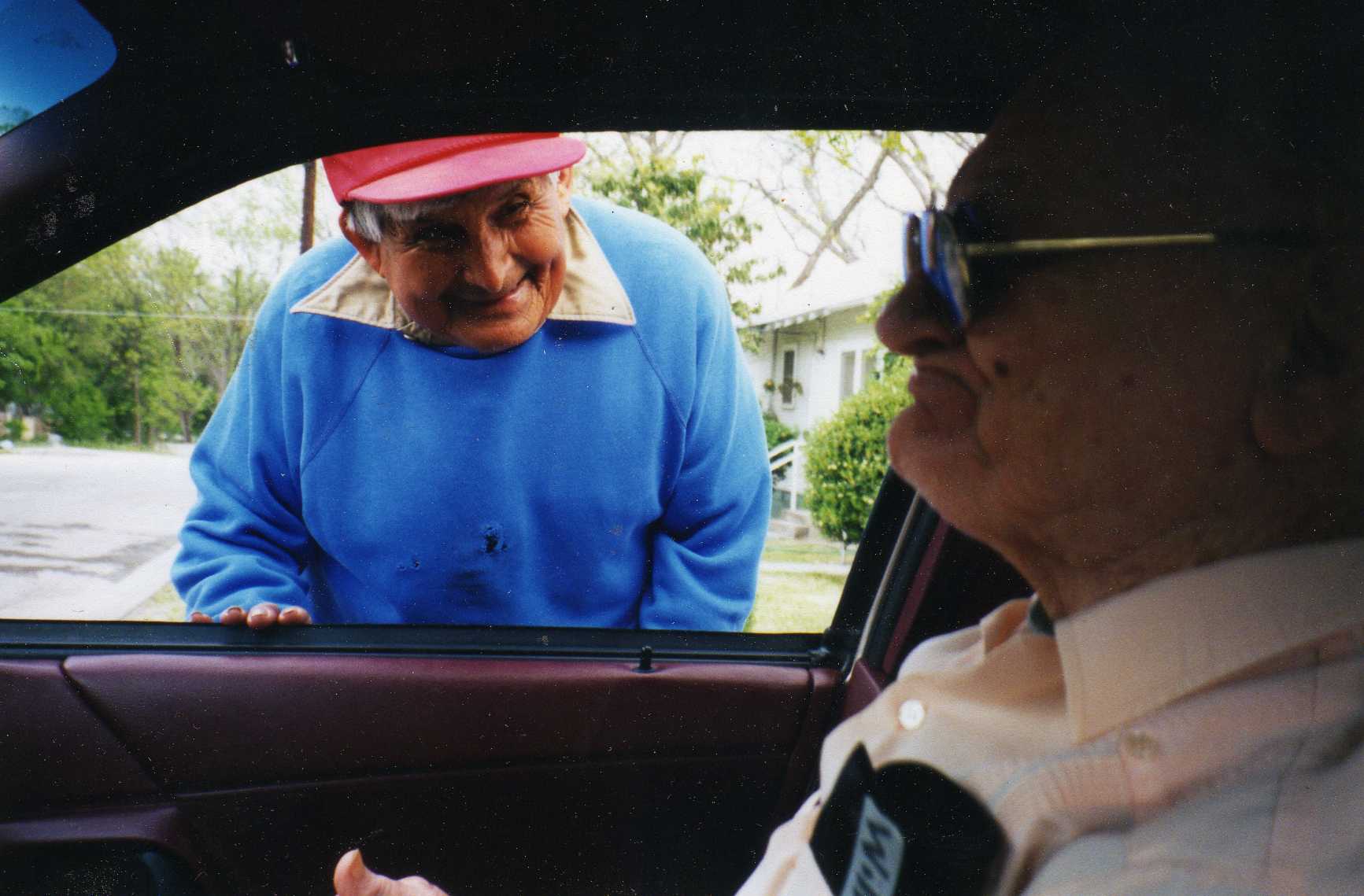 I don't remember Juan's last name.  I just know he was gentle and friendly and would work for so little.  When I brought my kids and husband to Texas to visit my parents each year, I made sure they saw and met Juan so that they would know a 'sweet soul' like him.  I had that privilege growing up and wanted them to have that same privilege.

My last days in Del Rio were in May 1998 when my mom died.  Juan came around, as he had done so many years, and in my broken Spanish, I tried to tell him that my mother had died.  I think he understood.

It was 1959 when I arrived in Del Rio at age 15.  I lived there for the next 30 years, marrying Rusty Reams and raising a family.  I saw Necktie Joe frequently in the various circumstances others have described.  My children remember him, too.  They always hollered and waved at him along Pecan Street when we drove by where he was "on duty."

In about 1979, our family became acquainted with a Border Patrol agent named Mike Furman.  He was a widower, having been married to Leta Faye Latham of Del Rio.  Their son Brian was a good friend of my youngest son, Ben Reams.  We all attended various church functions together at times, and the boys raised and showed sheep in 4H.

Once in conversation, someone mentioned Necktie Joe.  Mike volunteered that the Border Patrolmen (who all speak Spanish fluently) had a soft spot for the old man.  They helped him out at times.  Mike said he was a good guy, just mentally challenged.  Then, he said, "He doesn't understand a lot of things, but when anyone asks him, “Donde es Jesus Christo?" (Where is Jesus Christ) this simple little man would point to his chest and declare with that wide, almost toothless grin, “Aqui en mi cortisone!" (Here in my heart) (Forgive my Spanish --- I can hardly speak any and can spell none!)

I wonder if ol' Juan might just make it through those Pearly Gates ahead of some of us who have all our marbles - The simple faith of a child.  (Jesus said that!)

Linda (Ledbetter) Wisian, Class of 1965
Yes, what a wonderful Old memory. I had forgotten him but the mention of his name brings back Old Del Rio - Pecan trees and canals.  I remember him as a sweet, simple man. When ever possible I would tell him he looked nice and I liked his tie.  This seemed to please him.  Thanks for the memory.

Guillermina (Bosquez) Stover, Class of 1971
I enjoyed immensely Pat Mitchell's trip down memory lane of "Necktie John."  I knew him with his Spanish nickname, "Juan Corbata."  That necktie served to make him look so distinguished.

I moved to the Garden Park neighborhood in 1977, the year my father, Pedro Bosquez,  died.  Seeing Juan in the neighborhood always brought such memories of dad.  Growing up we didn't own a car, so dad walked everywhere.  As did Juan.  Dad's last career was as a gardener for Dr. Hi Newby and Dr. Newby's dad.  And Dad was a dapper dresser himself, wearing long sleeve shirts and a felt hat in the winter or a straw hat in the summer.  As did Juan.  Someone told me that his sister took very good care of him, making sure he was dressed and pressed.

But there the similarity ended.  "Juan Corbata", as Pat Mitchell said, was a special person with special needs.  He hung around HEB and flirted with all the girls.  And I think it made us feel special ourselves.

One summer day in 1998 while walking in my neighborhood, I was on Riverview Lane.  And there Juan was in his backyard.  He waved to me.  I waved back.  I hadn't seen him around town in quite some time, and I suddenly realized why.  He was getting old and couldn't get around as much.  The minute I passed Juan's house, I burst out crying.  For all the memories of him in downtown Del Rio.  For reminding me of my beloved father.  And for the bittersweetness of life...

Gary Humphreys, Class of 1964
Yes, Necktie Joe was a fixture in south Del Rio, Remember him well almost got my a$$ kicked in HEB, taking up for him around 1993, a couple of other gents stepped up also and that ended that.  Ha only at HEB….
When he died in 1998 I attended his funeral very few were there. Little I could do for a man that helped me through many a traffic light and stop signs.