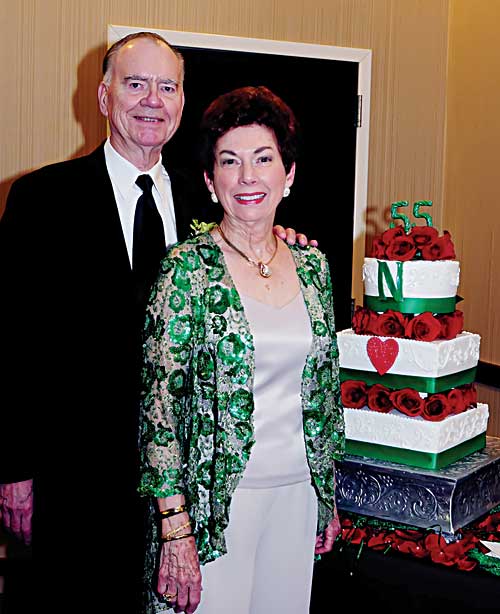 Gene Harvey Nerren and Jo Ann Ricks Nerren of Lufkin, celebrated their 55th Wedding Anniversary by renewing their wedding vows at Believers Bible Church in Lufkin on September 4, 2010, with their children, Michael and Barbara Nerren of Rockwall, Marilyn and Richard Troth of Grove City, Ohio, Matthew and Toni Nerren of Corpus Christi, granddaughter, Michelle Troth of Grove City, Ohio and grandson, Martin Troth of Grove City, Ohio, as their wedding party. Pastor, Dr. Bob Klund officiated the ceremony before family and friends. John and Cynthia Burnett sang a duet, "The Vows Go Unbroken." Joe Nerren provided the music for the ceremony. Kenneth Ricks, Jo Ann's brother, who was best man at their wedding 55 years ago, in Del Rio on September 3, 1955, read the scripture reading from 1 Corinthians 13:4-13. During the commitment, 1 John 4:7-10 was read by Martin Troth and before the renewing of the vows, Ruth 1:16-17 was read by Michelle Troth.

After the ceremony, a reception, with dinner and dancing, was held at the Courtyard Marriott in Lufkin. Joe Nerren provided the music for the evening.

Gene and Jo Ann entertained their family and out of town guests in their home on Friday evening, September 3. 2010.

Gene was Chief Financial Officer for Brookshire Brothers before retiring in 2000 after 38 years. Jo Ann established Nerren Employment Service in 1969, the first employment service in Lufkin. Gene and Jo Ann have lived in Lufkin for 55 years. Mrs. Nerren is the former Jo Ann Ricks, graduate of Del Rio High School in 1954.

Note: Any Alumni who has been married 50+ years deserves credit and respect. If you are in that elite category please make us aware.