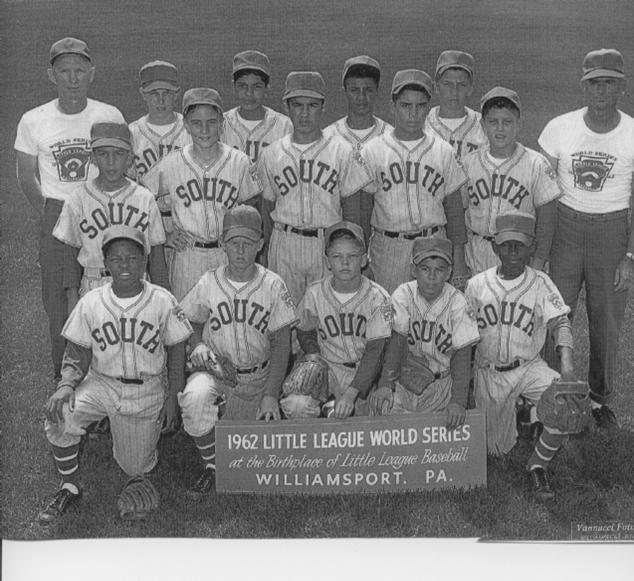 Nine members of the Del Rio 1962 Little League All-Star team gathered at the home of Lonnie Ricks Saturday for a reunion to celebrate the 50th anniversary of the team’s appearance in the Little League World Series. Pictured, from left, are Ron “Ronnie” Ricks, Erasmo “Eddie” Gutierrez, Arturo Fernandez, Johnny Nation Jr., Ray Suarez, Larvell Blanks, Richard Treviño, Larry Harrington and Henry “H.T.” Green Jr. The team is holding the official pennant they received for winning the 1962 Southern Regional tournament.
The 1962 Del Rio Little League All Star team played in the Little League World Series and came away with the consolation chamionship. We bagan the season with wins against Uvalde, Laughlin AFB, Hondo/Dhanis, and Pleasanton. Next we won the San Antonio area tournament with victories against San Antonio Highlands and Corpus Christi Oil Belt.

In Williamsport we played in a single elimination tournament and lost our first game to Pittman, New Jersey 2-1. We followed that up with victories over the national champions of Canada and France to win the consolation championship.

Most of us boys had never left Val Verde county and we spent the summer flying around the country in jet airplanes and playing games in three states. We dined in the Congressional dining room with Senator Ralph Yarborough and Congressman O.C. Fisher, visited the White House, attended a Washington Senators baseball game, and visited the Gettysburg battlefield. When we returned home, we were treated to a parade through the city, numerous banquets, and were all given keys to the city. It was the experience of a lifetime for a group of eleven and twelve year old boys and none of us will ever forget it.
Please use the Website Contact button at the top of the page if you wish to comment on the above. Please include your name and class year.
Johnny Lee Brockwell, Class of 1960
I remember Mac McGraw ( my uncle) telling me about how he was always telling the kids on the team to keep their eyes on the ball and always follow the ball into their gloves (probably because I was the worlds worse at trying to run with the football before I caught the pass).  Anyway, on the final out of the either the consulation victory or the game that they won in order to go to the Little League Wworld Series, a grounder was hit to Larvell and, of course, Larvell remembered what Mac had said and after he caught the ball, he held it up and looked at Mac to show Mac that he did the right thing.  Mac almost had a heart attack, but Larvell, of course, threw a beeline ball straight to the first baseman for the final out.  There are a lot of things to be proud of concerning Del Rio but the 62' Champs (I'll always think of them that way) were one of the best things.  Congratulations to a well deserving group of kids (now men).  We'll always be proud of you.
Sergio Mireles, Class of 1970
Great accomplishment! Shows Del Rio youth of today that athletes from this community can excel like the 62 team did. So proud of all you guys!
Pat (Mitchell) Dunn, Class '71
Can't tell you all how much I have enjoyed following the 1962 Little Leaguers on the Wildcats site....My husband and I are both HUGE baseball fans and tho I was too young to remember these guys back then, I am thoroughly enjoying seeing the old and new pics of all the team.
Congrats to ALL. Very proud to have a DR team do so well!!!
Hank Woodward, class of 1956
Thanks for this informative article.  I knew of the outstanding accomplishment of the 1962 team, but I did not know all of the team members or details of their very successful season.  I have sent the article to others not from Del Rio who will be interested.

David Horne, Class of 1965
I would like to be one of the first to congratulate the coaches first and then the boys (now old guys) for that fantastic run of wins.
First, having just coached High School football, J.V. and varisity baseball this past year, I can tell you how much dedication it requires just on one's time.   Then, a good coach wins as many games as the players with his or her smart, experienced, timely decisions.  For instance, when do you pull a pitcher?  Before he throws that fateful pitch hit over the fence to lose the game; or after, and
it is too late?
Do you send the runner home or hold him up at 3rd base and lose the game by one run?  I remember my father Arthur Horne and all the other coaches who were great at timing (good coaches have a God-given sense of timing and seemingly can see the future and dictate their own team's future with their great decisions).  Coaches not as skilled ......well...
So, before we give all the credit to the fantastic players, my hat first goes off to Phil Ricks, D.A. Harrington, and all the other coaches who coached up these players.  Great going !!! You are all winners.